a giant has fallen

I first knew him as "The Mad Scanner," but I was sorely mistaken. A fellow Wheaton student told me about a stern man who spent hour after hour scanning documents in the basement of the library. I had seen a man who fit that description scanning on the 2nd floor. We wondered if the mysterious man was digitizing documents illegally to sell them online. After all, who could read all that material? The librarian asked us to let him know if we ever saw the "Mad Scanner" again, since he was clearly abusing library privileges. One day there he was, scanning like mad. I went downstairs to report the suspicious activity. The librarian went straight upstairs to check it out. My heart pounded. I waited. Soon he returned, puzzled. "The only person I saw at the scanner was Harry Hoffner."

My jaw dropped. I felt the blood rush to my face. Harry Hoffner, the renowned Hittitologist? "Are you telling me that man scanning on the second floor is Harry Hoffner?" There I had sat at my desk, scarcely 20 feet from the copy machine where Dr. Hoffner collected sources for his research and writing. Could it be that I had even cited him in my papers without realizing he was standing at his post right around the corner? How embarrassing! This was no Mad Scanner. He was a professor emeritus, a giant among peers. 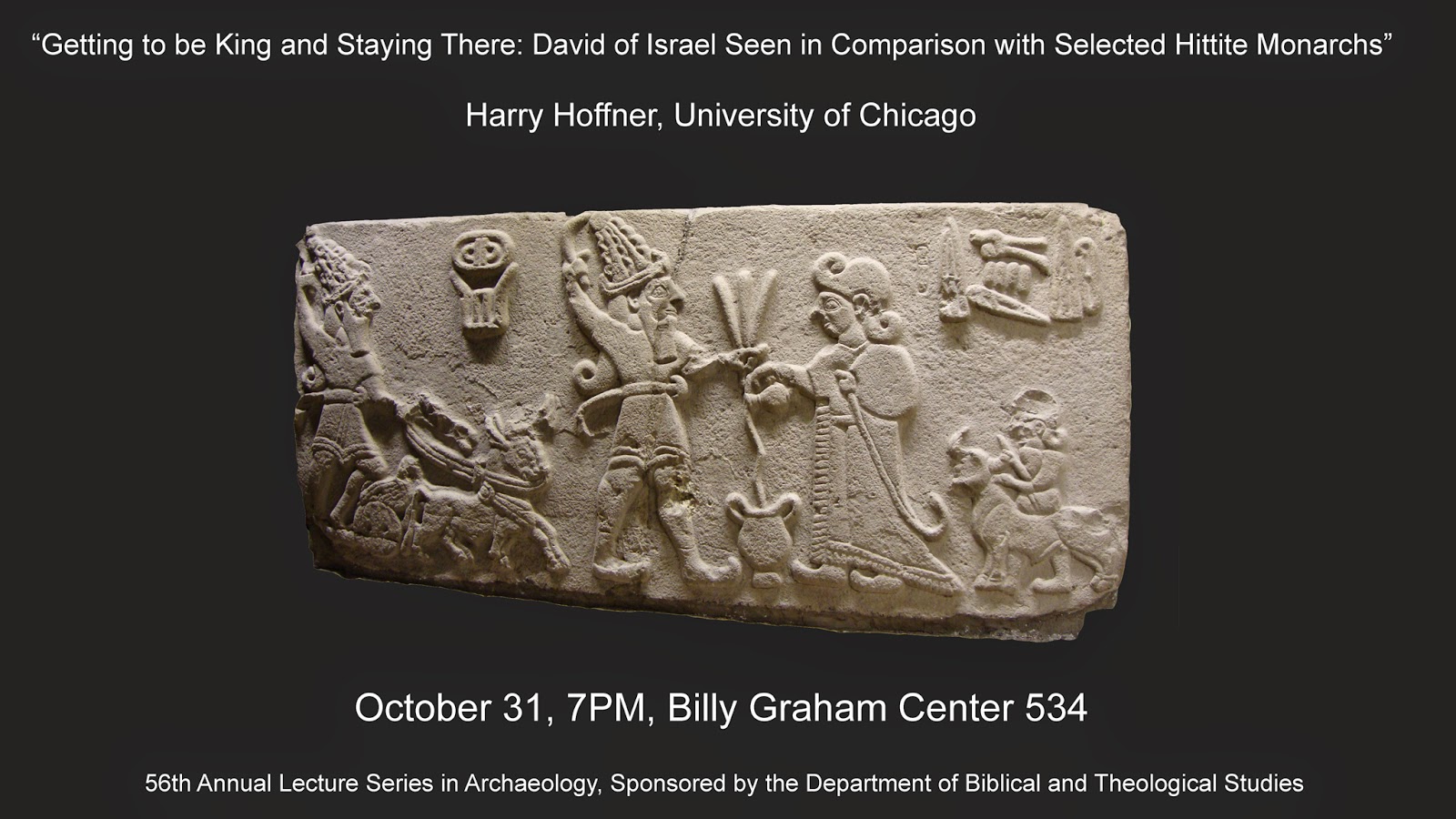 Fast-forward a few months. Dr. Block asked me to help publicize a lecture on campus. The esteemed Dr. Harry Hoffner would be giving a talk on David's kingship in light of Hittite monarchs. I hung posters, arranged for electronic announcements on TV screens across campus, and showed up early to the lecture to make sure Dr. Hoffner and his wife had everything they needed. That's when I first shook hands with both of them.

Now that I knew what he looked like, I saw him often in the library. I began to say hello. Because of the lecture, he now recognized me, too. Dr. Hoffner was the consummate researcher. Several times a week he combed the shelves for sources to undergird his research. He was, I found out, producing a commentary on 1 and 2 Samuel for the Lexham Bible Commentary series online. No wonder he needed so many books. He became a fixture in the Wheaton College library (which was closer to his home than the University of Chicago library).

One of my duties as Dr. Block's TA that year was to make sure Dr. Hoffner (a long-time friend) had the books he needed for his research. It was simple. He emailed me, I requested books and put them on hold for him when they arrived. It only took a few minutes, but Dr. Hoffner was very grateful. I discovered that it was a handy thing indeed to have an expert "in the house." Was there a Hittite equivalent to the Hebrew segullah? Can you think of any Hittite treaties where the king promises to protect the oppressed? Do you have a digital copy of such-and-such article you've written, which is not available online?

His knowledge of Hittite language and culture was so encyclopedic that you could catch him in the library stacks and ask him a question and he could quickly scan through everything in his mental "files" and give an accurate answer. He was also kind and conscientious enough to double check his personal library when he arrived home and email the results. He came through for me just last month when I needed an article he wrote for a conference paper I was writing (and quick!). Harry Hoffner to the rescue!

Dr. Block tells me that he once heard Dr. Hoffner give advice to young scholars at a conference, saying, "Be good at what you do, and be good." Dr. Hoffner certainly was both. He was a master in his field as well as a model of virtue.

It wasn't all work. In December I sent Dr. Hoffner a link to this hilarious parody just for fun because it reminded me of him more than anyone else I know (you really must watch it). And he wrote me to see if we were watching the Oregon Ducks play. He told me of his current projects, an article honoring a deceased French Hittitologist, a dissertation examination for a student at Trinity, a paper for a colloquium. He also continued to serve as Senior Editor for the Chicago Hittite Dictionary project — a project he began in the 70's.

I don't think he realized it, but Dr. Hoffner's kind words encouraged me through some of the most difficult days of my time at Wheaton. He had hoped to see me graduate, and it would have meant so much to have him there. But alas, it was not to be. His earthly life came to an abrupt end earlier this week, shocking us all. In one of his last emails to me, dated December 30, 2014, Dr. Hoffner said, "I don't think I will ever cease doing research in some way in Hittitology and in the Bible." He was right. He was engaged in several projects right up until the end, not only researching and writing on the Hittites, but teaching an adult Sunday school class for the College Church choir on the book of Acts. Now Dr. Hoffner has joined the "great cloud of witnesses," where he will cheer me on to the finish (Heb 12:1).

Dr. Hoffner, I'll miss you. I'm so glad our journeys intersected in this life. Save me a spot in the heavenly choir!

Carmen Imes
Dr. Carmen Imes is the Associate Professor of Old Testament at Prairie College in Three Hills, Alberta, and serves the broader church through teaching, speaking, and writing. She earned a PhD in Biblical Theology (Old Testament) from Wheaton College under Dr. Daniel Block, an MA in Biblical Studies from Gordon-Conwell Theological Seminary (Charlotte), and a BA in Bible and Theology from Multnomah University. She and her husband, Danny, served as missionaries with SIM 15 years. They have three children: Ana, Emma, and Easton.

visit the holy land for free!

I've spent part of the day weeding in my back yard, cooking dinner, and hanging out with my kids. I spent the rest of my day exploring Jerusalem. No kidding.

Did you know you can walk the streets of Jerusalem and pan around major archaeological sites right from the comfort of your own home?

At SBL in November I attended a session where various professors shared ways they are using technology to help their classrooms come alive. It was a fascinating session—with video games, classroom games, virtual tours, and maps on Google Earth. Today I tried some of the websites to see which ones will work best for my class on the Gospels at Multnomah. Bingo.

Here are a few of my favorites:

A virtual ascent from the pool of Siloam to the Temple in Jesus' day, with music. This is the route priests would have taken during the Feast of Tabernacles, carrying water from the lower pool to pour out upon the altar. See John 7 and 8.

Several short videos highlighting this same route through the City of David (the oldest part of Jerusalem) to the Temple.

Stunning, 360-degree interactive photos of dozens of key biblical sites. The professor who was showing us this resource (his favorite) at SBL was delighted to discover that the creator of this website was in the audience!

Brief 3-D animated videos of many holy sites in and around Jerusalem, high resolution photos, and interactive virtual tours of several of the most important, like the Temple Mount and the Western Wall. You can choose narrated or self-guided tours.

If you've been to Israel before, these sites allow you to relive your experiences. If not, you can get a taste of the world of the Bible. It will help the text come alive like never before. Try it and see!

Carmen Imes
Dr. Carmen Imes is the Associate Professor of Old Testament at Prairie College in Three Hills, Alberta, and serves the broader church through teaching, speaking, and writing. She earned a PhD in Biblical Theology (Old Testament) from Wheaton College under Dr. Daniel Block, an MA in Biblical Studies from Gordon-Conwell Theological Seminary (Charlotte), and a BA in Bible and Theology from Multnomah University. She and her husband, Danny, served as missionaries with SIM 15 years. They have three children: Ana, Emma, and Easton.
Newer Posts Older Posts Home
Subscribe to: Posts (Atom)