Why We Need Latin Americans to Help Us Understand the Bible

I'm beginning to see the Bible with new eyes.

It began with a syllabus. Increased ethnic diversity at both of the universities where I teach has made me more conscious of how "white" and Western my assigned readings have been. With the help of my beautifully diverse Facebook community, I've made the effort to discover books written by Africans, Asians, and Latinos. Armed with a list of friend-approved favorites, I ordered copies of a half dozen or more.

I want to tell you about two favorites. Both are from Latin America. Both are slim, inexpensive, and accessible. Both are rocking my world. 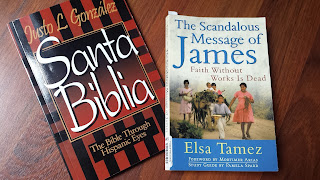 Justo Gonzalez is known for his work as a church historian. But in Santa Biblia, he offers us a glimpse of what it's like to read the Bible through Hispanic eyes. Some of you may object: "We should be reading the Bible for what it says, not for what we bring to it. Our ethnicity doesn't change what the text means."

Agreed. But our social location can prevent us from seeing what is there. We make assumptions about the situations the Scriptures address because we see the world from a particular vantage point—say, white, middle-class, suburban American—unaware of the authors' context and concerns. We have blinders on.

Old Testament Israelites and New Testament Christians have far more in common with the average Latino, African, or Asian than they do with wealthy Americans. That's one reason the perspective of these communities is so valuable. They are a bridge.

Gonzalez is not engaged in a special hermeneutic, as far as I can tell. He is simply reading the Scriptures with his community and noticing what it says. But because of his life experience, he notices things I miss. In some cases, his observations simply add insight. In other cases, he turns my interpretation on its head.

Here's an example from his first chapter, focusing on marginality. Gonzalez takes us to Luke 4, where Jesus gives his inaugural sermon in Nazareth, quoting Isaiah 61. At first, Jesus' listeners are pleased (v. 21–22). Gonzalez notes,


"But Jesus suddenly changed his tune—or at least, it would seem so from the point of view of his audience. Until then he had said that they were at the very center of things. The Scripture was being fulfilled right there, 'in your hearing.' Now he tells him to expect no special privileges. He is not about to do in his hometown the things he did at Capernaum." (Gonzalez, 43)

Jesus brings up two Old Testament examples, Elijah and Elisha. Both prophets went to those at the margins, to non-Israelites—a Phoenician and a Syrian, in fact—to work their miracles. The mood in the room radically shifts. Gonzalez explains,


"This was no longer a message about how they were at the very center of things, seeing the Scripture fulfilled before their eyes. This was rather a warning that they should expect no privileges, for God often works at the margins rather than the center. No wonder they tried to hurl him off a cliff!" (Gonzalez, 43)

Imagine if Jesus appeared in your church this Sunday, announcing that God's kingdom had arrived, and that he was here to make all things as they should be. Great, right? But what if he told you his first plan of action was to welcome exponentially more Syrian and Lebanese refugees, to help them set up shop in your neighborhood, and to live among them? How would you feel then?

We tend to read Scripture as though it is God's good news to us. But in the case of Luke 4, the good news indicts those who prefer to keep all the kingdom benefits for themselves. I never noticed this until Gonzalez showed me.

In her book, The Scandalous Message of James, Elsa Tamez brings a similar perspective, but instead of offering examples from various places in Scripture, she works her way carefully through the book of James.

James is a practical book, addressing matters of wealth and poverty, among other things. Tamez explains how a Latin American reading of the book is different:


"For James the oppressors are the rich (plousioi). He does not hesitate to point them out as such. His antipathy toward them and his sympathy with the poor is undeniable. Interestingly enough, many of the commentaries on James dedicate long pages to the rich, thus consciously or unconsciously attempting to relativize this contrasting picture that James paints."

"This great concentration on the rich is to be expected: on the one hand, many biblical commentaries from Europe and the United States are written in situations where there are many rich people in the churches. How does one tell these members that according to James there is no room for them in the church? We should note that many of the points made in these commentaries are accurate enough; what is striking is simply the angle of the perspective and the special concern for the rich. A Latin American reading of the epistle, on the other hand, fixes its gaze on the oppressed and dedicates long pages to them, their sufferings, complaints, oppression, hope, and praxis." (Tamez, 21, emphasis added) 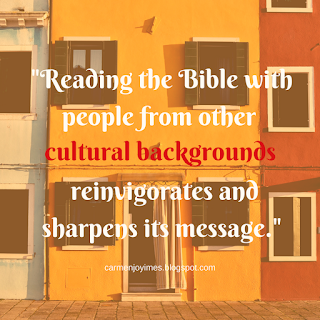 By now it should be obvious why these books will not just be important for students of color, but for all of us in the classroom. Reading outside our tradition overcomes myopia.

I've heard it said (I don't remember where) that the Bible is intended to comfort the afflicted and afflict the comforted. Reading the Bible with people from other cultural and socio-economic backgrounds reinvigorates the Bible's message and sharpens its critique of our own complacency.

This won't be easy, but our brothers and sisters from Latin America stand ready to help. Together we can learn more, love more, and become more. Are we willing to listen?
Posted by Carmen Imes at 7:52 PM 2 comments: