We bought our house in Oregon sight unseen back in 2014. Crazy, I know. Except that we had family members kind enough to comb the area, take loads of pictures, talk to neighbors, and smell each room. They helped us make an excellent choice. And we had a good God who had prepared the way. 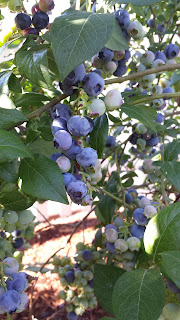 When our moving truck arrived I was delighted to discover three blueberry bushes in the front yard, planted years earlier, laden with ripening fruit. Within a couple of weeks, I was picking 3 cups of blueberries each morning, then 4, then 7. I counted over a hundred cups of berries that summer -- enough for a whole winter's worth of smoothies.

No thorns, no sweat, no planting or tending. Berries just ready for us to eat.

As I picked in the early morning light, the words of Deuteronomy 6 often floated through my mind:


10 When the Lord your God brings you into the land he swore to your fathers, to Abraham, Isaac and Jacob, to give you—a land with large, flourishing cities you did not build, 11 houses filled with all kinds of good things you did not provide, wells you did not dig, and vineyards and olive groves you did not plant—then when you eat and are satisfied, 12 be careful that you do not forget the Lord, who brought you out of Egypt, out of the land of slavery.

We were not the first to experience God's good provision. Israel's bounty came with a warning -- "don't forget who provided all this!" So here I am remembering. To me the blueberries were a tangible (and tastable!) daily refresher on God's goodness. I didn't even know I wanted blueberries, but here they were, and I was grateful.

This summer we're eating blueberries like crazy. We can't take them over the border with us to Canada, so we're relishing juicy handfuls and sharing them with friends. And as if God wanted to end this story with an exclamation mark, he provided a garden-watering job for Ana this month that has been mouth-watering for the rest of us -- a garden brimming with raspberries and blackberries that would rot if we didn't eat them. And so we have. Handfuls of the most delicious berries we've ever eaten.

Our God is so good. And we can trust him to go before us and prepare the way. He provided berries in Oregon City. He'll provide abundantly in Three Hills, too. God is like that.

Before we moved to Oregon, the kids would often ask, "Will our new house have a ____?" or "Can we buy a house with _____?" In my thoughtful moments, I answered, "We'll see what God provides!" As it turned out, he granted room to flourish and recover from the intensity of PhD studies, another amazing set of neighbors, and berries. Lots and lots of berries. The same God who provided blueberries arranged for my Canadian citizenship 40 years before anyone knew I would need it. That's impressive.

The LORD promises neither a rose garden nor a blueberry bush, but he does promise to be with us always. Ultimately, that's all we need.
Posted by Carmen Imes at 9:38 PM 3 comments:

Spirit, lead me where my trust is without borders.
Let me walk upon the water wherever you would call me.
(Hillsong, "Oceans")

If your church is like ours, you've sung this song innumerable times. Did you mean it? How did God answer your prayer?

He has answered ours in a very surprising way.

In March we announced to our financial supporters that we were taking a step of faith by resigning from SIM, the mission we've served with since 2002. After 15 wonderful years of ministry with SIM, we felt God moving us into full-time teaching ministry. We hoped that a full-time job would materialize for me, but even if it didn't, we knew what we were called to do: Danny would focus on keeping our household running smoothly so that I could devote my energy to teaching. Lots of people step out in faith to become missionaries; our step of faith meant no longer raising financial support. Danny moved down to part-time with SIM while we explored possibilities.

We knew what we wanted -- to stay planted in Oregon and keep teaching (preferably with a full-time salary), to keep investing in these students and these relationships. But when no doors opened in Oregon for a full-time job, we began checking job postings in other locations. We knew this year could be a roller-coaster. Most schools post academic jobs around the beginning of the fall semester to begin the following academic year. That makes for a long season of uncertainty about what's next. How much energy would we spend imagining life in different locations, waiting for an interview?

But God had a surprise in store.

At the tail end of May, when hope in Oregon had dried up and we were buckling in for the long roller-coaster ahead, a job was posted at Prairie College in Three Hills, Alberta. Their need was urgent. They wanted to have an Old Testament professor in place by July 1st. Gulp.

They say that if you're the least bit open to taking a job, you should apply for it. I remembered having a good impression of Prairie when I was in high school, looking for a college. It's a small school well off the beaten trail with a long history of sending missionaries all over the world. Crazy as it sounded, I applied.

I figured there was little chance of an American being hired. Canadians would be given priority. But applying was a matter of due diligence. The up side was that there would be no long roller coaster with this one.

The next couple of weeks were a flurry of research. When I emerged less than 2 weeks later as the top candidate for the position, we felt the weight of the decision. We wanted to go in with our eyes wide open. This would be a major transition for the entire family -- not something to be taken lightly.

We scrambled to talk with mentors, read about the school, and explore the area online. I made a long list of questions and concerns. Danny started working on a budget. And we prayed. If we said 'yes,' we would be crossing an international border, with a complicated and expensive immigration process ahead.

In late June, Danny and I flew up to Calgary where we were greeted by a friendly colleague and a vibrant landscape of rolling green prairie with a stunning sunset. During the 75-minute drive to Three Hills, we started in on our long list of questions. We had a number of concerns about the job, and we had asked friends to pray for confirmation and clarity. Over the next 48 hours, we were surprised as our concerns melted away one by one. We loved the little town of Three Hills. The houses were nicer. The schools were stronger. The area was more beautiful. The salary was higher than we thought. My course load was less than we thought. We thoroughly enjoyed getting to know the faculty, staff, and students on campus. In the end, we wanted the job.

Imagine my surprise to discover that God had been making arrangements for this job since birth.

On our final morning there, I received a text from my Dad that still floors me whenever I think of it. He was born in Canada, which I knew, but none of us had ever wondered what this meant for me and my brother. I assumed that he became a US citizen when he married my mom and that his Canadian citizenship was a thing of the past by the time I was born. But it wasn't. He waited until I was four years old to become a US Citizen. Chances are high that he is still a dual citizen, though he didn't realize it then. And the clincher: it's almost certain that my brother and I are dual citizens. We were born outside Canada to a Canadian citizen. That's all it takes. In fact, my children are likely dual citizens as well, since they were born to a dual citizen prior to 2009 (when the laws about the second generation changed).

This will make the process of immigrating to Canada far less complicated and expensive. We simply need to pay a fee to have our records checked and a certificate issued that proves our citizenship.

When my official job offer came, there was another surprise -- a part-time job for Danny that fits his skill set beautifully.

We're in the throes of packing, selling our house, writing syllabi for fall classes, ordering passports for the kids, and saying our goodbyes.

Our God is full of surprises. We didn't expect to cross an international border again, but we're eager to see what God has in store for us in Canada. As I said in my sample lecture at Prairie, God has lessons to teach us that can only be learned in a state of dislocation. No doubt we'll have challenges ahead. But we're confident that the same God who has called us out upon the waters will be right there with us.
Posted by Carmen Imes at 2:49 PM 4 comments: