The world of the New Testament is foreign to us -- languages, customs, religions, geography, and politics are so different from our own -- and crossing that gap can be challenging. Thankfully, two esteemed New Testament professors have made it a little bit easier for the rest of us to experience that world. Bruce Longenecker (Baylor University) and Gary Burge (Wheaton College) have each written an imaginative work of historical fiction to illuminate the New Testament. 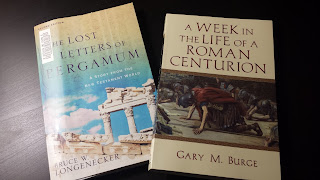 Burge's book, A Week in the Life of a Roman Centurion (IVP, 2015) follows an officer of the imperial army, Appius, and his trusted servant, Tullus, as they are assigned to various locations around Syria and Palestine. At the end of the book, they are assigned to Capernaum and their paths cross that of a simple prophet from Galilee, an encounter that changes everything. Burge's novel is easy to read and hard to put down. The story pulled me in. Informative text boxes are placed strategically throughout the book, offering background information on 1st century practices.

Longenecker's book, The Lost Letters of Pergamum (Baker, 2003/2016), is set a few decades after Jesus' resurrection, in the Asian city of Pergamum. His main character is a Roman nobleman named Antipas whose life revolves around the acquisition of both wealth and honor and the avoidance of shame. The story itself is the collected correspondence of Antipas and Luke, who had been a traveling companion of the apostle Paul and the author of a 2-part Gospel (known to us as Luke and Acts). Luke and Antipas share a love of history and a familiarity with the Roman way of life. However, when Antipas begins reading a copy of Luke's Gospel and associating with Christians, his world begins to unravel. A surprise ending brings the book to a satisfying finish. The genius of Longenecker's book is that we encounter Jesus and his teachings through the eyes of someone at home in the Roman empire. His sophisticated tale takes a bit more effort than Burge's to engage, given the appropriately stilted style of letter-writing, but it is well worth the energy.

The two novels are exactly the same length (187 and 189 pages, respectively). Both are rooted in extensive research on New Testament backgrounds, and involve real figures such as the Emperor Domitian and Herod Antipas. Burge takes his point of departure from the New Testament stories recorded in Matthew 8:5-13 and Luke 7:1-10. Longenecker's inspiration is Revelation 2:13, and he clarifies in an appendix which points of the narrative are fictional and which are not.

Sensitive readers should be forewarned that both books are rather bloody, giving detailed descriptions of gladiatorial games, and (in the case of Burge) battle scenes. Burge also incorporates aspects of the sexual lives of his characters (with concubines and prostitutes in particular), illuminating age-old problems. I read both of these within the past week, hoping to decide which to assign for my students to read in "Gospels, Acts, and Revelation" next semester. Unfortunately, it didn't make my decision any easier! I loved them both. Which one will you read first?
Posted by Carmen Imes at 4:29 PM 1 comment:

coming up for air

I've learned something about myself.

When I'm in the middle of a semester, I feel less compulsion to write blog posts because I already have an outlet. My students — like it or not — get to hear what I'm thinking about.

Add to that three women's retreats in the space of a single month, and you'll understand why a month has passed since my latest post. I haven't run out of things to say. It's just that I've already said them. In person. It's been a rich season, full of the joy of rekindled friendships and growing momentum in the classroom, but rather breathless.

Last night I turned a corner. After the big push to get three kids settled in three different schools (elementary, middle, and high school), get into the groove with my own classes, and meet a publishing deadline, I'm coming up for air. Yesterday I had lunch with a student and felt the freedom to stop and chat with colleagues. Last night I ordered a magazine, did a load of dishes, dusted our bedroom, and looked for a new medical provider online. I caught up on old emails and started strategizing about the next major thing on my calendar: a trip to San Antonio for academic meetings (IBR and SBL). I can't even tell you how good that feels.

They say that class prep will take as much time as you give it. And that's true. My pattern has been to start with prep and let the rest of my to-do list fill in the cracks. But I'm learning that I might be better off doing things the other way around. At the very least, I need to get better at self-care. It's been over 5 years since I've seen a doctor (my kids are all in the same boat!). There's just never enough time. That needs to change.

Breathing feels good. I hope to keep doing so regularly.
Posted by Carmen Imes at 8:04 AM 1 comment: