The Sound of Music and the Audacity of Praise

I've been working on the "ugliest psalms" lately, the imprecatory psalms, which call upon God to bring harm on the psalmist's enemies. These challenge our sense of what belongs in the Bible and what are appropriate ways to pray. "Break my enemy's teeth" certainly seems an audacious prayer.

We might imagine that praise psalms are much more innocuous. With all their attention on God, they steer clear of the mud-slinging of human conflict and simply celebrate what we like about him.  Perhaps we think of praise psalms like a Mother's Day card ("Best Mom Ever!" . . . not to mention the only mom we've ever had) or like a standing ovation at the end of a an orchestra concert (Well done!). But praise psalms are much more audacious than that. I've written a piece for the Political Theology network on the audacity of praise, but here I'd like to offer a further illustration of what I mean.

To dial in to what's really at stake, we must consider their context.

Have you seen The Sound of Music? I think it offers an analogy that will help us with the significance of praise psalms. Captain von Trapp is a retired naval officer in Austria raising his 7 children with the help of one governess after another. The children are hard on these substitute mothers, so the captain turns to a nearby Abbey for help -- maybe a nun can keep his children in line! The Abbey sends him a novitiate, Fräulein Maria, who wins the hearts of the children as well as their Father. Their romance is set against the backdrop of a growing threat of occupation by Nazi Germany in 1938. They return home from their honeymoon to a Nazi flag flying over their front door, a summons to serve in Hitler's navy, and an (unrelated) invitation to perform in the Salzburg Music Festival. They attempt to escape to neutral Switzerland as a family that very night under the cover of darkness, but are caught in the act. Thinking quickly, the family pretends they are heading to perform in the music festival instead.

The joyous evening of music is strained by the presence of Nazi soldiers guarding the exits. In the front row sits the Nazi officer who was sent to escort Captain von Trapp to his new post in Hitler's navy. While the judges evaluate the results of the competition, Captain von Trapp regales the waiting crowd. Alone in the spotlight, he sings "Edelweiss," a simple song about a white alpine flower native to Austria. The lyrics are not in themselves seditious, but sung in this context, his audacity is plain. The lilting melody evokes for the crowd a longing for Austrian independence. The Captain is overcome with emotion, unable to finish the song. Maria, the children, and the entire audience join him for the finish, ending with the hopeful plea, "Bless my homeland forever!"

The psalms are like this. On their own, they don't strike us as rebellious, but set against the backdrop of Assyrian or Persian rule, they are a form of insurrection. Psalms of praise exalt Yahweh above all human rulers and rival gods, diminishing their claim to power.

To see what I mean, head on over to the Politics of Scripture blog to read my post.
Posted by Carmen Imes at 6:03 AM No comments:

My blog has been quiet lately, but not because I haven't been writing. Some longer-term projects took priority over the past few months. Here are some of the highlights: 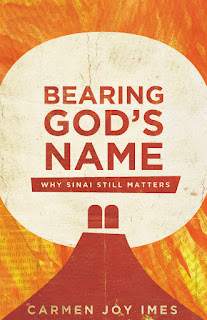 
This book is slated to release December 10, 2019, just in time for Christmas! It distills the key insights from my doctoral studies in non-academic language. If you've ever wanted to sit in on some of my classes, this book is for you. Together we'll journey to Sinai so that I can show you why Christians can't afford to ignore what happened there. From Sinai we traverse the rest of the Old Testament and into the New, seeing how Jesus and the early church found their identity and vocation at the mountain where they met God.

I can't reveal his name yet, but just wait until you see who has agreed to write the foreward! If you'll be in San Diego in November for ETS, IBR, or SBL, you can pick up copies there for all your friends. I'll carry a pen on me in case you'd like your copy signed. 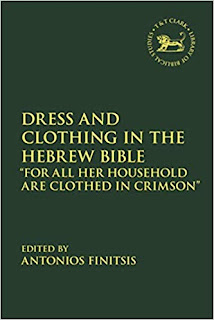 
This book is the culmination of four years of research and collaboration with other scholars in the Pacific Northwest Region of the Society of Biblical Literature. My essay explores the theological and symbolic significance of Aaron's high priestly garments.

Our second cycle of research is already underway, with eight papers slated for presentation this weekend at our regional meeting. My contribution this time around is on clothing metaphors in the imprecatory psalms.


Like my Illustrated Exodus in Hebrew, this volume will pair the unedited Hebrew text with beautiful illustrations by Keith Neely and a fresh English translation for easy reference. It will be a great way to practice Hebrew while experiencing the theological riches of the Psalms. Watch for it in November.


Funded by the Lily Foundation, this new book series helps under-resourced pastors to access classic works in biblical studies, theology, spirituality, and mission. I'm editing the inaugural volume on the Psalms. The book will include devotional comments on each psalm from early Christian writers in updated language, with a special focus on Augustine. 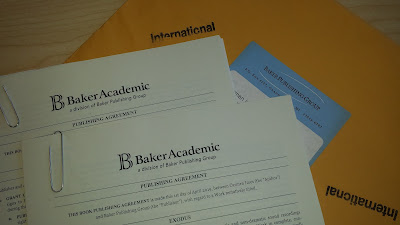 I've just agreed to take on this major 5-year project, a 700-page commentary on the book of Exodus for pastors, students, and scholars. Bill Arnold will serve as editor.

Watch for the Genesis volume in this series by John Goldingay. My contribution will be out by the time our youngest is in college.

As you can see, these span the range from accessible writing for the church to technical writing for the scholarly community, with resources for pastors and students in between. I love having a foot planted in both worlds and bridging the gap between them. It truly is the #bestjobintheworld!

Posted by Carmen Imes at 6:49 AM No comments: