Check out Christianity Today's top picks for 2015. Perhaps this list can help you with some last-minute Christmas shopping!

Studying at Wheaton put me at the heart of the Christian publishing world. CT was right up the road, as were Tyndale Publishers, Crossway, and InterVarsity Press. Grand Rapids, the other big hub, was just a hop over Lake Michigan, with Eerdmans, Baker, and Zondervan. Wheaton professors actively publish with all of these companies, so I found myself in a web of new connections. I could safely spend the rest of my teaching career requiring my students to read only books written by people I know. How cool is that?!

But on to the book awards. Here are the highlights (i.e. people I know and/or books I've read): 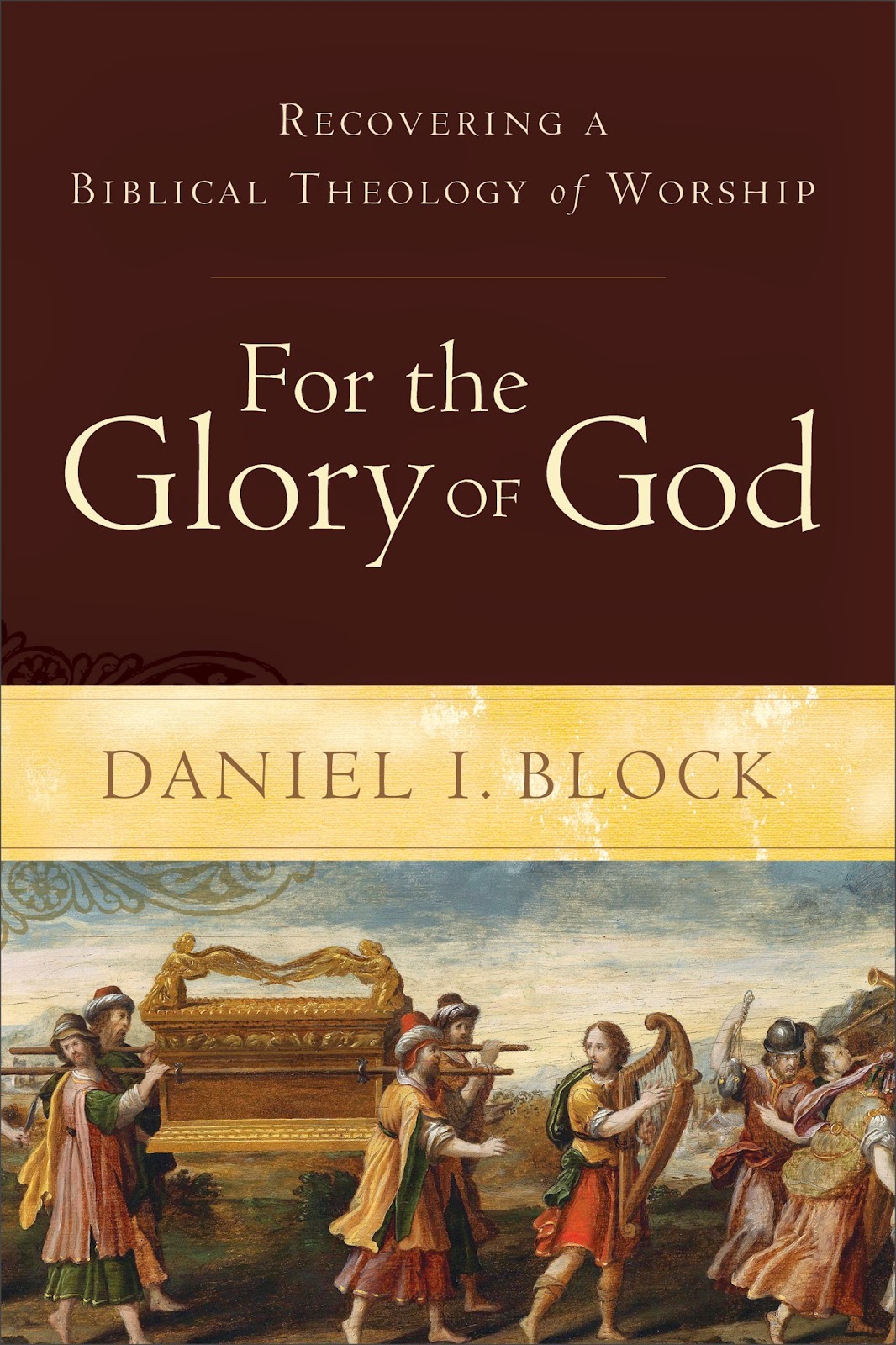 My own doctoral advisor, Daniel Block, received an Award of Merit in Biblical Studies for his latest: For the Glory of God: Recovering a Biblical Theology of Worship (Baker Academic). I had no part in this one, but I'm so glad to see it making a splash! It also appeared on Janet Mefferd's Top 10 Books of 2014 and an Honorable Mention on Kevin DeYoung's list at The Gospel Coalition. 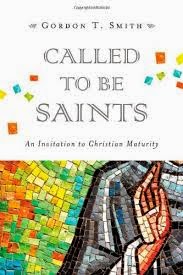 In the area of Spirituality, an Award of Merit goes to a book I recommended earlier this year: Called to be Saints: An Invitation to Christian Maturity, by Gordon T. Smith (IVP Academic), president of Ambrose University College in Calgary, Alberta. 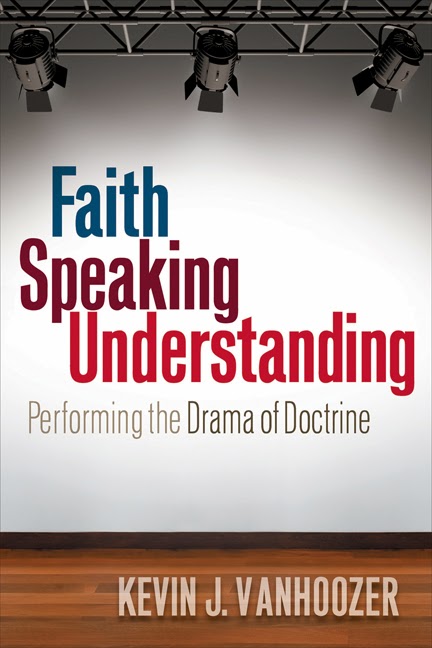 For Theology and Ethics, first place was awarded to Kevin Vanhoozer's Faith Speaking Understanding: Performing the Drama of Doctrine. I had the honor of studying with Dr. Vanhoozer at Wheaton (he's now at Trinity Evangelical Divinity School). You might be interested to know that this book is a more popular version of his weighty Drama of Doctrine, released in 2005. 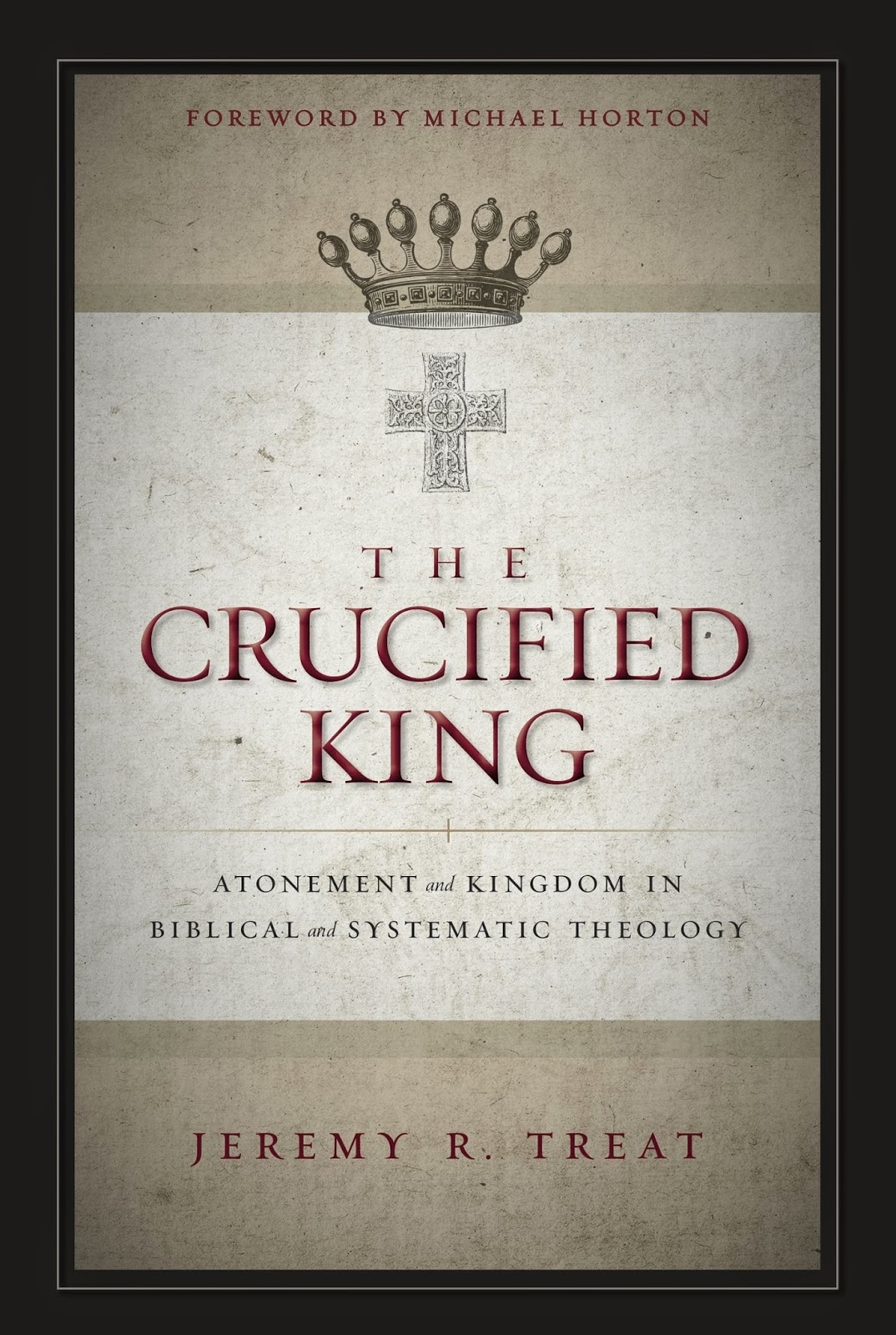 One of Dr. Vanhoozer's doctoral students, my friend and colleague Jeremy Treat, received the Award of Merit in the same category for a book based on his Wheaton dissertation, The Crucified King: Atonement and Kingdom in Biblical and Systematic Theology. Congratulations, Jeremy! 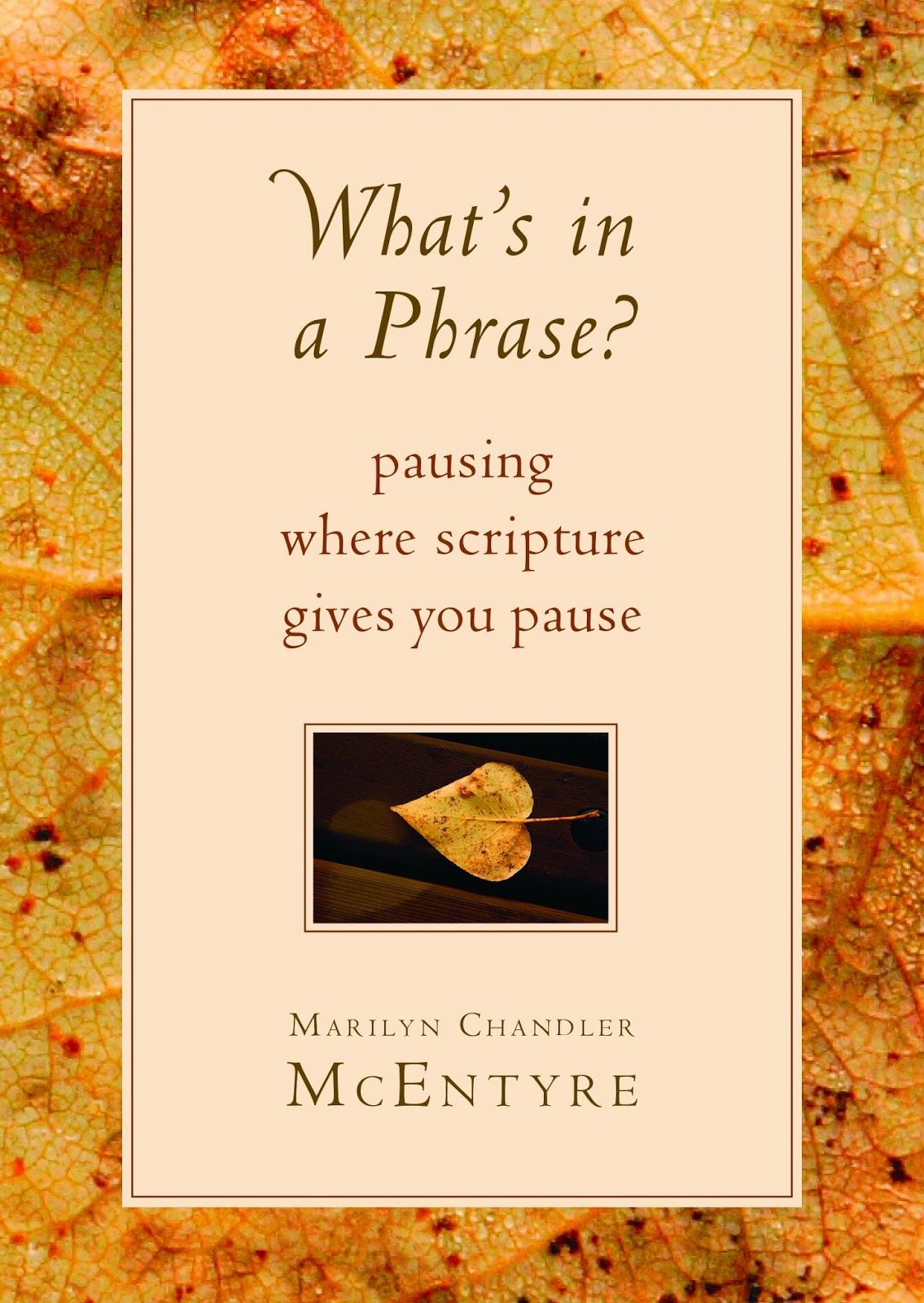 And now for a few more titles that caught my eye and are landing on my wish list:

First place in Spirituality: What's in a Phrase? Pausing Where Scripture Gives You Pause by Marilyn Chandler McEntyre 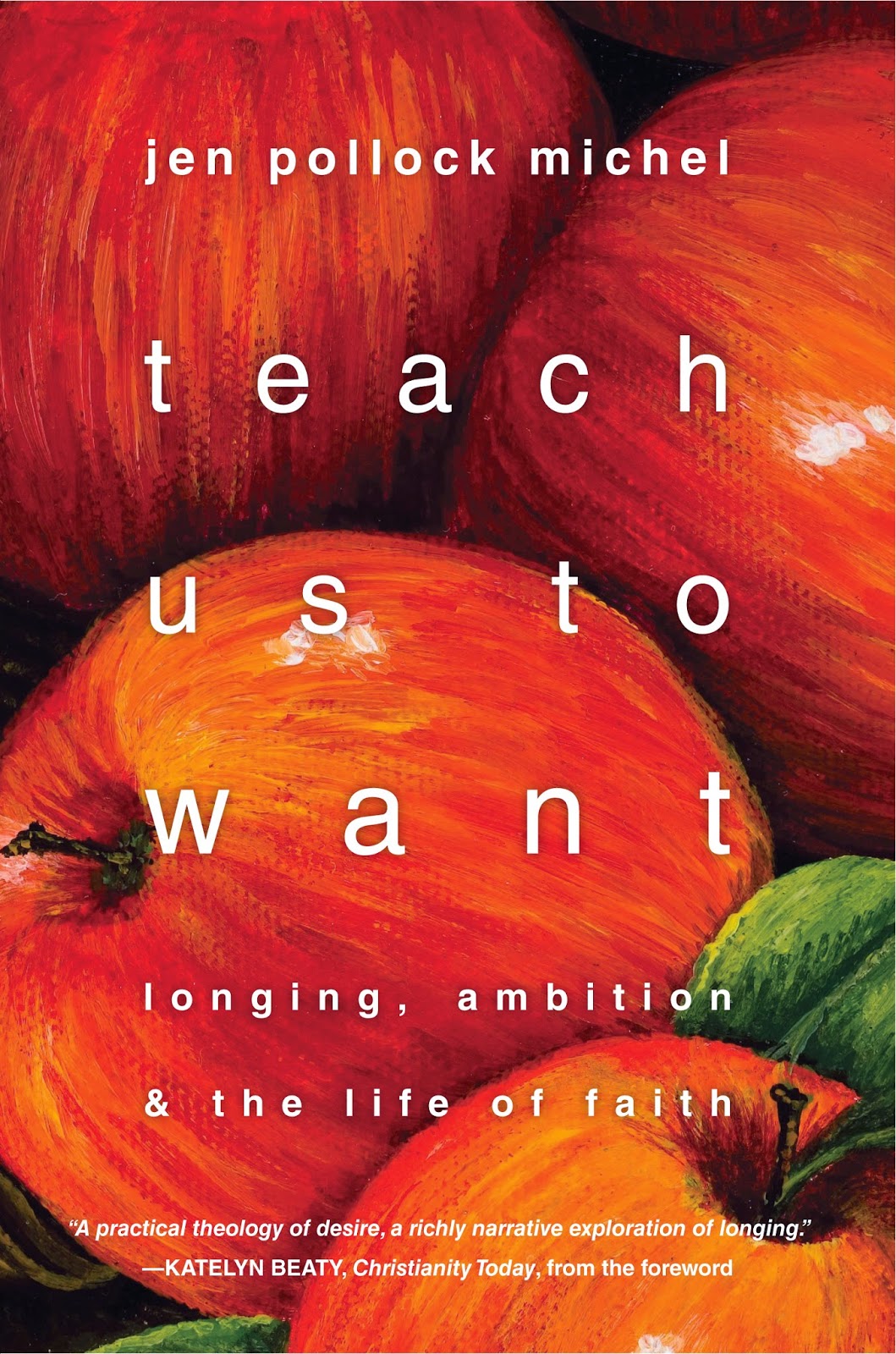 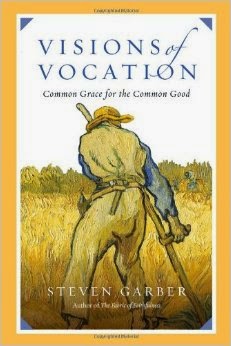 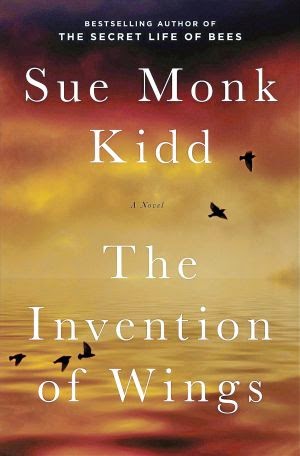 Award of Merit in Fiction: The Invention of Wings, by Sue Monk Kidd (Viking Adult)

Life is too short to read everything. You might as well start with the best!
Posted by Carmen Imes at 6:00 AM No comments:

a chat with Jesus

I merged into the morning traffic on 205 northbound, headed for the library at Multnomah. Since the car I was driving lacked a stereo, I thought I'd have a chat with Jesus to pass the time. This was one of those rare moments sans kids, sans distraction, where I might have called Oma. But I can't do that anymore. I began to pray, and then a happy thought struck me -- I could call Joanne! In retrospect, it was a chat with Jesus all the same.

Joanne is a treasure. We used to be able to see her home from our back window in Charlotte, and we often ran into her on her daily walks through the neighborhood. We were thrust together, really, since we both worked for the same organization, and lived so close together in the same neighborhood. Ron suffered a stroke not long after we moved in, which meant he could no longer drive. Joanne had spent most of her adult life as a missionary in Africa and had never learned to drive. At almost 80, she felt it was too late to learn the skill, and so they walked or rode with friends. Sometimes we did our grocery shopping together.

During the 4 1/2 years we lived as neighbors, Joanne exuded joy, no matter her circumstances. Ron's health continued to decline. After a time she could no longer leave him home alone while she took her daily walk through the neighborhood. He came along and they walked to the end of the block and back. As her walks got shorter and her world got smaller, Joanne's faith only grew. Some months ago when I called her, she reported that they were no longer able to go to church. It was just too hard on Ron. This was a huge loss for her, as she readily acknowledged, but responded in faith. "Carmen, you know what? God's grace is sufficient. We've had many happy years in church, and now our world is shrinking. It will be okay."

I often think to call her in the evening, but the time change between us makes that impossible. A morning commute was the perfect time to catch her. She sounded so delighted to hear my voice (I imagine that adult conversation lends a little bit of sanity to an otherwise trying day). I asked about Ron. Joanne is careful to honor her husband, when he's in earshot and when he's not, but reading between the lines . . . I could tell things were getting pretty tough. He's gone way downhill. Confused, I gather. And easily frustrated, perhaps? I ask Joanne if she's able to manage on her own. She pauses, trying to find the right words. When she does, they are life-giving, "Able? I don't suppose that's the best word. No, I'm not able. But I'm 'enabled.' He gives us everything we need, doesn't he?"

Joanne doesn't want to talk about herself, except to say how sweet the Lord is, or to read me a bit of poetry she came across that enlarged her soul, or perhaps to confess the ways that God is convicting her of sin and challenging her to grow. She wants to know how we are. How is Danny's work with Sports Friends? How are the kids? How are my studies? It feels strange to tell her about the opportunities, the open doors, our adventures ranging far and wide. But there is no hint of self-pity on the other end of the line. Only celebration, and the sense that she is somehow living large through me.

In addition to raising kids and keeping a home, Joanne spent her years in Africa teaching Bible while Ron worked for the mission in finance and accounting. This combination of gender/career paths is obviously not the norm, and certainly not for their generation. I'm sure this is a big reason why we bonded the way we did (think about it: wife Bible teacher/husband accountant). We are kindred spirits, 40+ years apart. When I told her the news that I'll be teaching at Multnomah, and that I chose as a textbook the book she was the first to tell me about, Joanne was thrilled (Lynn Cohick is a family friend of hers). Within moments, she had other ideas about books I should find in the library that had been a great help in her own understanding of the gospels.

And so we talked. We sighed. We praised. And we prayed our way up 205 together. And when I hung up the phone, I was utterly convinced that I had just spent the drive in the presence of Jesus.
Posted by Carmen Imes at 10:14 PM No comments: