Many a day goes by where I sincerely wish that I could get a transcript of our conversations at home. Each of our kids are in such a delightful stage!  I would, of course, cut out all the whining and arguing and keep stuff like this ...

Emma: “Will there be math in Kindergarten?”
Mom: “Yep!”
Emma: “Oh, good! Math is my favorite category!”

Eliana on the death of her parents: “Who’s gonna get Rosetta Stone Spanish when you die? Can you put it in your will for me?”  (Evidently it's a hit!)

Easton, holding a can strainer up to his ear: “Hehwo?” (All the cell phones in the room were currently being used.)

Easton, counting straws enthusiastically: “B! O! I! D!” (He gets the idea of counting, but hasn’t figured out the difference between letters and numbers).

And then there was Easton, struck speechless in the grocery store parking lot as a semi truck drove by close enough to see the driver. The driver noticed him frozen there, waved, and then honked (REALLY LOUD!). That was the highlight of the morning. Somehow I don’t remember this stage with the girls!
Posted by Carmen Imes at 11:57 AM 3 comments: 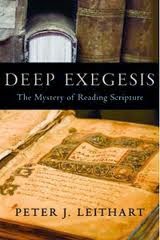 I'm reading a book by Peter Leithart called Deep Exegesis: The Mystery of Reading Scripture. Great book so far!  Leithart wants us to get to the place where we are experiencing Scripture the way it is written, rather than rushing to get to the 'timeless moral truth' that is being taught.

He likens reading to music.  Music is impossible to appreciate in one moment, and there is no fair way to summarize it.  Instead we must take the time to listen to the whole thing, appreciating the beauty of each note in relation to the others.  The more times we hear the entire piece, the more we will know it and the more that music will shape the way we think and feel.

Here's what Leithart says about the Bible:  "God in his infinite wisdom decided to give us a book, a very long book, and not a portrait or an aphorism.  God reveals himself in his image, Jesus, but we come to know that image by reading, and that takes time.  God wants to transform us into the image of his image, and one of the key ways he does that is by leading us through the text.  If we short-circuit that process by getting to the practical application, we are not going to be transformed in the ways God wants us to be transformed.  'Get to the point' will not do because part of the point is to lead us through the labyrinth of the text itself.  There is treasure at the center of the labyrinth, but with texts, the journey really is as important as the destination." (55, emphasis mine)

Perhaps this is why I so often have trouble distilling what I'm learning from Scripture into a blog post.  Short cuts are never as beautiful as the scenic route, and a photograph is a poor substitute for a journey.  Hopefully the snippets I share here will spur you on to take a few trips yourself.  Take your time, and enjoy the ride!
Posted by Carmen Imes at 5:57 PM 2 comments:

This summer I've been immersed in the Jacob Narratives (Genesis 25-35), translating them from Hebrew to English and reading them over and over again.  Each time I read them more things stand out to me.  The author did such a beautiful job of arranging and telling these stories!  There is so much that could be said about Jacob, but here are some big things that stood out to me:

Jacob's name means 'heel-grabber', a designation which applies to him both literally and figuratively.  Not only did he grab his twin brother Esau's heel as he was born, but he continued to claw his way to the top into adulthood.  We're told he deceived his brother twice, once for his birthright (Hebrew: 'becorah') and once for his blessing (Hebrew: 'beracah').  Jacob's deception was so well-known that 'heel-grabbing' became another word for deception.

But being a heel-grabber is not all it's cracked up to be.  Jacob reaps what he sows. Fleeing for his life from his angry brother, Esau, Jacob ends up in Haran, at the home of his future father-in-law, who arguably beats Jacob at his own game.  After working for Laban for 7 years to win the hand of Rachel, Laban's younger daughter, Jacob wakes up the morning after his wedding to find he has been duped.  Just as Jacob tricked his blind father out of his older brother's blessing, so Jacob has been tricked under cover of darkness by his intended bride's older sister.  The chickens have come home to roost.  In a scene dripping with irony, Jacob asks Laban, "'What is this you have done to me?  Was it not for Rachel that I served with you?  Why then have you deceived me?'  But Laban said [using the same words to describe his daughters that have been used to describe Jacob and Esau], 'It is not the practice in our place to marry off the younger before the firstborn.'"  Jacob is stuck.  How can he argue against this?  It is also not an acceptable practice to give the birthright and the blessing to the younger son!

Fourteen years later, his relationship with Laban is so strained that again he flees, this time homeward.  As he nears home, again under the cover of darkness, he wrestles all night with a man whose identity is unknown to him.  As the dawn breaks Jacob grabs the man (he's good at this!) and begs for a blessing (have we read this before?).  The stranger asks Jacob, "What is your name?"  This question we have also heard before, in the darkened tent of Isaac, who suspected that someone was impersonating his firstborn, Esau.  This time Jacob passes the test and owns up to his own identity: "Jacob."  In this moment of truth the man declares a new name for Jacob; he will now be called Israel.  In his weakness and admission of the truth he finds his greatest blessing.  Jacob has now heard enough to know who this man is, and he calls that place Peniel, which means 'Face of God'.  Jacob has encountered God himself and been changed.

All through his story two threads are woven together.  The first is Jacob's own striving, his heel-grabbing.  He is constantly trying to get things to work out in his favor.  But quietly beneath this another theme shows itself consistently: God's purpose to bless Jacob, the heel-grabber.  Jacob doesn't deserve it.  He's difficult to live with and too often relies on his own strength.  In spite of this God continues to reaffirm his promise to be with Jacob, to bless him and make him the father of many nations.

During the night of his wrestling match Jacob had finally hit bottom.  He is terrified of meeting his brother Esau again, afraid of the hatred and revenge he expects to find.  He prays fervently for God's favor.  Then he prepares an enormous gift, 550 animals, for his brother, hoping to appease his anger.  He bows down to him and treats him like a king (exactly the opposite of what had been prophesied of them!), begging Esau to accept back the blessing that was rightfully his.  Esau accepts, and they are reconciled.

As a reader it's exhausting to follow Jacob's life of striving, deception, and anxiety.  He is always trying to get things to work out right for himself, trying to cover his own back, when all along God is there, ready to bless him if he will just own his sin and admit his need.  Are we any different today?

If you've never read Jacob's story before, or if it's been awhile, I encourage you to do it.  It will take less than an hour, and you will be struck by what a remarkable story it is.  True stories are the most inspiring of all.  If God can bless and use Jacob, then he can use anybody!
Posted by Carmen Imes at 1:23 PM No comments: