a scholar grows up

A paradigm shift. A coming-of-age of sorts.

In one week, three milestones:

1. A senior professor at Wheaton, known around the world, told me to call him by his first name.
2. A Wheaton student invited me to "Dine with a Mind." (This is Wheaton's meal benefit that encourages students to share a meal with their professors. Normally I am the student. That time, I was the "Mind.")
3. A Wheaton student asked me to fill our a reference form for a mission trip.

These milestones marked the beginning of my transition from student to teacher, a transition that is still not complete, though at least 2 years have elapsed since these events. But this week, more milestones:

1. A student at George Fox asks me to fill out a reference form for a summer job.
2. Two recently-published authors ask me to help them get the word out about their books.
3. A pastor asks me to go head to head with him in his Sunday School class, talking about Romans, ethnic Israel's future, and the nature of biblical theology.

Clearly, it's a new season. And I'm grateful!

Posted by Carmen Imes at 6:30 AM No comments:

It was missions Sunday, so naturally I issued a challenge to extend God's love to those outside the reach of the gospel. In this case, refugees.

What made this challenge a risk was its timing:
Let's face it. The refugee crisis will not be solved overnight.
As a nation, we do not see eye to eye on this issue.

And yet, I felt compelled to speak. Politics aside, the church is called to welcome the stranger.

As I sat waiting for my turn with the microphone, Sarah stood up with an announcement. Her arms were full of towels and she carried a plastic grocery bag laden with toothbrushes, soap, and combs. She issued a challenge of her own, calling for the collection of funds and supplies such as these . . . to be given to refugees. 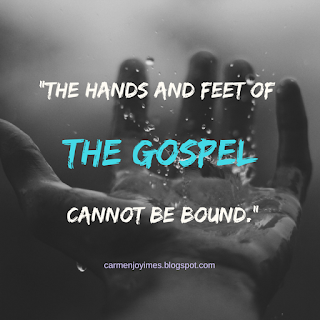 I relaxed. Clearly the Spirit was already at work.

At the close of my message (an abbreviated version of which is here), Pastor Kevin stood and addressed the congregation, thanking me for my message and sharing that he had already offered to have refugees move in with his own family.

Beautiful. Already the congregation was mobilizing to help refugees far and near, refusing to allow campaign rhetoric define or limit their faithful obedience to God's call. I merely reinforced what the Spirit was stirring in their midst.

The hands and feet of the gospel cannot be bound.
Posted by Carmen Imes at 6:00 AM No comments:

refugees and religious extremists -- what to do?

Did you hear the story about the Christian man from Syria? To protect his identity, let's call him "Hanan." Unlike most of his neighbors, Hanan is a follower of Jesus. I don't know a lot about his life, but I know that being a Christian is dangerous in his part of the world. It's a volatile place, with various factions vying for control. Hanan is respected by his neighbors, even those of other faiths, but still he has to be careful. You never know who can really be trusted. One day Hanan had a vision. The Lord directed him to go into Syria's capital to a specific house and ask for a man by name. When Hanan heard the name, he shuddered. The man he was to seek out was a religious extremist, bent on destroying the Christian faith. He had made a name for himself capturing Christians, imprisoning them, and torturing them to the death. Would the Lord really ask Hanan to go into harm's way? This didn't make sense! He protested, but Jesus reassured him and so he obeyed. He went to the house he had seen in his vision, asked for the terrorist by name, and prayed for him, inviting him to surrender his life to Jesus.

Are you curious how the story ends?

Actually, I don't know how things turned out for Hanan. What I do know is that the terrorist he met that day was a transformed man. He went on to spread Jesus' teachings all over Syria, Turkey, Greece, and then Rome. He corresponded with those who came to Christ, and those letters were collected in the New Testament. We call him Paul. The man I called "Hanan" is Hananias, or Ananias, and we meet him in Acts 9. Did you recognize his story?

Acts 9 is a key chapter in the study of Paul and his writings, but we don't typically spend much time thinking about Ananias. All we know about him is that when Jesus called, he obeyed, even at risk to himself. That single act of obedience changed the course of history.

Our obedience does not guarantee our safety, but it gives us a front-row seat to watch God transform lives.

In the words of Jim Elliot, "The will of God is always a bigger thing than we bargain for, but we must believe that whatever it involves, it is good, acceptable, and perfect." Or in the words of the popular song, "Spirit lead me where my trust is without borders, let me walk upon the water, wherever you would call me." (c. Hillsong United, 2013)

Ananias was a peacemaker. He walked into danger at God's command and extended Christian love to a dangerous man named Paul. Because Paul had not yet encountered Jesus, his religious zeal was misplaced.

Even today, across the Muslim world, the risen Lord is appearing in dreams and visions to our monotheistic cousins. Some of them — driven by war or propelled by opportunity — will cross oceans and arrive on our own shores. Many are zealous for the faith of their parents. Will we meet them with scowls and tell them to go somewhere else? Or will we welcome them warmly, building bridges so that in this place of religious freedom and physical safety they can openly pursue a relationship with him? In other words, will we view this as a problem or as an opportunity?

A friend of ours who has lived and worked closely with Muslims in the Middle East and Asia for many years explained to me that Muslim extremism thrives wherever Muslims experience rejection and hatred from others. One of the best ways to prevent Muslims from radicalizing is to offer them a warm welcome and a place to call home. It's much harder to hate those who reach out in love. Muslims who encounter suspicion, fear, and rejection become vulnerable to the clever recruitment tactics of radical Islam.

Last month, Evangelical leaders gathered to pen a declaration of Christian response to the refugee crisis. They remind us, "the refugees fleeing this violence are not our enemies; they are victims." The statistics of this burgeoning humanitarian crisis are staggering: "Never have so many people been recorded as being displaced, put in danger, and sent on the move. In Syria alone, more than 13 million children and their parents need humanitarian aid. Nearly 4.4 million have been forced to flee to neighboring countries for safety."

I am not writing as a politician, or even as a politically active citizen. Our nation's leaders will decide how to handle the refugee crisis. Beginning today, American citizens can cast their vote to decide who is best equipped to make those decisions. My challenge relates to the 'now what?' If and when the refugees arrive in our own communities, what would a Christian response look like? Are we willing to welcome them in the name of Jesus?

Our obedience does not guarantee our safety, but it gives us a front-row seat to watch God transform lives.

Perhaps among the throngs of refugees there is another Paul, one whose determination to destroy Christianity is fueled by deep devotion to Allah and a desire to purge the world of untruth. At any moment, Jesus could reveal himself to one such as this as the Lord of all the earth. And when he does, would we be as responsive as Ananias? When Jesus calls, are we ready to step out in obedient faith?

Our single act of obedience could change the course of history.
Posted by Carmen Imes at 7:14 AM 1 comment: