Leaning In: One Year Later

Just over one year ago, I decided to read Sheryl Sandberg's Lean In: Women, Work, and the Will to Lead. Now I'm looking back and taking stock of what I've learned. I reworked last year's blog post into an updated article for The Well, published today on InterVarsity's blog for Women in the Academy and Professions.

. . . By the time I got my dissertation back, dripping with red ink, I was already a month into teaching. I had less than two weeks to cut dozens of pages and tighten my arguments. During those two weeks I didn’t use impressive PowerPoints in class, didn’t grade anything, and didn’t meet with students outside of class or attend any special events on campus. But then my defense draft was submitted, and my teaching rhythm returned to normal.
And I learned that Sheryl Sandberg was right. I had almost said no because it didn’t seem convenient or practical, because I might end up too busy. But saying yes worked out fine. My students survived, even though they weren’t the center of my universe for a couple of weeks in February. Most importantly, I finished my degree and finished out the spring semester, gaining a wealth of practical experience in the process.

You can find the whole article here.  I hope my journey inspires you to lean in, too!
Posted by Carmen Imes at 7:57 AM No comments:

If you were an African American woman working at NASA in the early 1960s, you would not need any imagination. This would be your life. 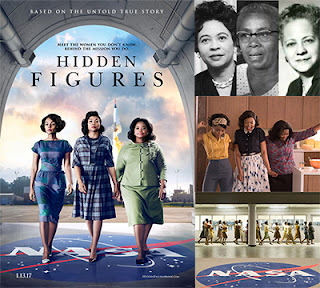 Hidden Figures is a movie that will take you into the world of three women who walked in these shoes. Given the segregated times during which these brilliant women lived, I suspect that their experience was widely shared by people of color.

A lot of progress has been made since the 60s, but friends of color tell me that we still have a long ways to go. Assumptions and stereotypes about aptitude, motivation, or immigration status plague these brothers and sisters. Guarded suspicion is more readily extended than friendship.

We are much closer now than we were then to equity and equality, but let's not imagine there is no work left to be done. 2016 made that painfully obvious. Perhaps President Trump's most lasting legacy will be bringing the blatantly racist attitudes that persist in America into the light of public discourse. As troubling as this was, we might as well know the truth about where we are as a nation. Maybe this truth will compel us to seek justice.

The flurry of executive actions in Donald Trump's first week as President underscores the urgent need for private citizens, churches, and non-profit organizations to champion the cause of justice. If in the past we have relied on governmental agencies to ensure a just society, we know now that such an approach is inadequate. This has always been true. But now it's undeniable. 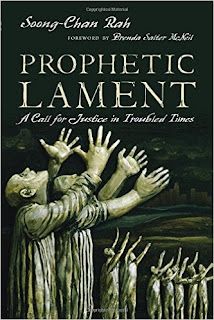 In Soong-Chan Rah's Prophetic Lament: A Call for Justice in Troubled Times, Rah urges his readers to cultivate "a personal connection to the corporate sin that has entered our culture." He says, "We must move from 'let's just get over it' to 'how do I personally continue to perpetuate systems of privilege?' Justice must move from the third person to the first person, from the abstract to the personal" (125–26). This is such timely advice.

Just this morning I heard about an African American PhD student in Chicago who was pulled over in 2015 and accosted harshly by police for suspected auto theft in spite of his respectful compliance with law enforcement officers. Friends, the man was beaten for driving his own car. Examples like these can be readily multiplied. As long as we live in a world where this can happen, we cannot rest.

The only great America will be the America where every human being — no matter their race or gender — is treated with dignity, compensated fairly, given credit for their work, and given a voice and a place at the table. If this is the America we want, we need to create it. Let's get to work!
Posted by Carmen Imes at 7:43 PM No comments:

a prayer companion for the next four years

Evangelicals have found ourselves in an awkward place this election season — heavily courted and yet publicly disdained. One day wooed, the next betrayed. There has been no easy way to navigate political conversations with friends and neighbors as emotions run deep and issues flare. Choosing how to vote created a conundrum for many people. Which policies are most compatible with Christian faith? Which issues should be highest priority—the economy? immigration? the unborn? race relations? How much should a candidate's personal beliefs (or lack thereof) and character (or lack thereof) play into our decision?

Some Evangelicals concluded that the only Christian vote was a Republican vote because it had the best chance of overturning Roe vs. Wade or was most likely to preserve the freedoms enjoyed by Christian institutions. Other Evangelicals felt passionately that the Democratic candidate best embodied the biblical ideals of caring for the poor and the oppressed. Still others felt that neither candidate had the personal character necessary to occupy the oval office. Some of us voted for a third party candidate. Others abstained in protest.

Wherever you find yourself on that spectrum, if you consider yourself an Evangelical, like it or not the polls have securely linked the president-elect with your vote. That means the world is watching, and you will be blamed for whatever happens next. A change in leadership always brings opportunities and risks. Whether you are concerned about what these next four years may hold or you are celebrating regime change, I've got a book to recommend just for you.

In a world full of pressing needs and deep divisions, this book is a call to prayer and fuel for action. For those whose hearts are heavy, this is one way to transform your burden to focused prayer. For those who are optimistic about the incoming administration, this book will augment your prayers for our new president in ways that consistently reflect God's kingdom priorities. 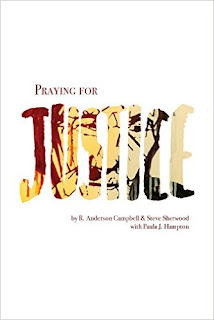 Offering a quote each week and a Scripture verse for each day of this four-year administration, Praying for Justice functions like a lectionary. As the authors describe it,

The title of this book contains an invitation to pray for justice, but this book contains no overt prayers. Many of the more than fourteen hundred Bible passages contained here are prayers or portions of prayers. To read these texts is to be invited to join them in prayer.

This book invites us to use each day's verse as a meditation or reflection for that day and each week's quotation as an examination of the ways in which your life images God's redemptive justice in the world.

This book was a labor of love by three of my colleagues at George Fox University. Anderson, Steve, and Paula worked like the wind for four weeks straight after election day so that you could have this resource in your hands in time for the inauguration. All the proceeds will be donated to Church World Service, to aid them in their work resettling refugees.  You can order your copy on Amazon.