We were in the mood to explore. Up for something new. Felt like we needed to get "out." But where?

Then I had an idea. I doubted it would be anything dramatic, but there was a waterfall nearby that we'd only passed by and never seen up close.

We've lived in our small, historic town on the Willamette River nearly three years now. This waterfall was right smack dab in the downtown area. We pass it multiple times each week. It's about time.

I tried to make it a secret adventure but our resident teenager and pre-teen insisted on knowing where we were going. I told them. Their response: "Seriously?" They opted out, so Danny, Easton and I piled in the car. (This post is my "I told you so!")

Hardly more than five minutes from home, we parked and walked a half block to the top of the stone stairs. Our unique community has an elevator that doubles as a public street linking upper downtown to lower downtown. But it was closed for the evening, so we took the stairs. And that's where I wanted to be anyway, because I had never climbed them. I didn't realize that the waterfall went right beneath them. What a pretty spot! Leafy green trees created a tunnel of shade for our descent.

In the mood to meander, we headed past shops and restaurants and across the highway to the edge of the Willamette River to see what could be seen. We've driven by that spot hundreds of times in three years. Other than a few fishing boats and kayaks, we had never noticed anything worth writing home about. But we were in for such a surprise!

We stared at the water, foam still swirling from the Willamette Falls. Danny noticed the river seemed almost alive in places. Then suddenly the surface broke—two sea lions! We're more than an hour drive from the coast. How can this be? But it was.


We watched the sea lions for quite some time, following one fellow as he lazed his way down the river, poking his head up for air now and then. (It turns out the local fishermen are deeply concerned. There are at least 30 sea lions this year, and they're eating too many salmon!)

By the time we headed back to the stairs and up to the car, I was all the more convinced: You never know what you'll discover if you slow down. Linger longer. Park and walk. Take it all in.

There's a whole lot of life happening right under our noses.
Posted by Carmen Imes at 5:47 PM 2 comments:

I've written about heaven before, saying that we typically get it wrong, that it's not what you think. So what am I to make of a man who claims to have been there and back again? How credible do I find his story?

Paul Pastor, writer and fellow alum of Multnomah University, saw my blog post on heaven and asked me to read this story and blog about it, too. At first, Paul was also a skeptic. But Steven Musick had a story to tell and needed help telling it. After Paul met Steven and heard his story, he was convinced that something was different about this heaven-and-back experience. Together they wrote this book. 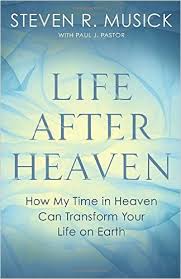 Life After Heaven: How My Time in Heaven Can Transform Your Life on Earth is an amazing story, but there's nothing flashy or sensational about the way Musick tells it. Instead, he invites us to see how God has made a difference in his day-to-day life by giving him a glimpse of what comes next. He relates his difficult childhood, early successes, and the unexpected illness that sent him on ahead.

"This Place must be heaven," he writes of what happened when he died. "This Place—heaven—is physical, real. In fact, it's more physical and real than the world I have known. It's not an ethereal, disembodied state, as some people might think. Senses, all my senses, are brilliant and deep. There is weight. There is movement. My body feels an overwhelming sense of freedom. It is wonderful. Totally free." (40)

After a brush with death and 5 weeks in a coma, Jesus sends him back and Musick wakes up.

He is crushed. After experiencing heaven, Steven's longing to be with Jesus again is almost debilitating at first. As he explains, "Heaven is all you want once you've tasted it" (155). He faces an incredibly painful recovery and over a decade of limited activity because his lungs were deeply scarred by his illness.

I don't want to spoil Musick's story by telling you what happens next, but through it he discovers that God is at work in profound ways right here on earth. Musick begins to realize that heaven is not as far away as we might think, and that we can experience it here and now if we're sensitive to what God is doing. He tells one story after another of "bubbles," moments when the kingdom of God shows up on earth, enveloping, exhilarating, fragile, and momentary.

Steven is honest about his doubts, his unanswered prayers, and his awkward moments. He takes no credit for his frequent encounters with kingdom of God. He offers no formula for guaranteeing divine presence. But he wants to awaken our sense of anticipation: "There's more that we should be experiencing in the here and now. Our expectations are far too low. Heaven is much closer than we think." (176)

It's been 40 years since Musick visited heaven. Why tell his story now? He wants it to make a difference in our lives the way it has in his.

"Do we all need to have a near-death experience to overcome the fear of giving God the totality of our lives, time, and resources? To give him our fears of loss? of suffering? of death?" (166) Musick hopes not. He aims to fill us with anticipation about what awaits us after death so that we're unafraid to embrace the fullness of life here.

Life After Heaven won't hit the bestseller lists. It's not sensational enough. The story is not exactly gripping. But Musick doesn't want it to be. It reads like a conversation over breakfast, a gentle nudge to look deeper, to long for more, and to be available to participate in the kingdom of heaven here and now.

That's what I like best about this book. It unveils the intersection between heaven and earth and gives us a taste of the vibrancy and healing of the presence of Jesus that we can begin to experience right now. Call it what you will—heaven, the kingdom of God, eternity, the new creation—we have a lot in store for us!

When Jesus travels around Palestine preaching, he isn't telling people the good news about what awaits them after death. He doesn't preach "heaven." He claims that the kingdom of God is near. He offers glimpses of that kingdom by healing people, casting out demons, telling stories, rebuking wickedness. His victories over the kingdom of darkness are tangible, earthy, working their way into the nitty gritties of life—bleeding, disease, conflict, ambition, death. He doesn't primarily show people how to die well, he shows them how to live well.

And that's exactly Musick's message. If you're curious, read his story for yourself!

Posted by Carmen Imes at 9:20 PM No comments: